In response to allergen provocation, a systemic response is activated in subjects with allergic diseases that involves the initiation of BM production of specific inflammatory cell (eosinophil/basophil [Eo/B]) progenitors, leading to early initiation of Eo/B differentiation and release of both progenitors and their progeny from the BM compartment; these cells are then typically recruited to the respiratory mucosa and other tissues in atopic individuals. Understanding the cellular and molecular signaling involved in these systemic responses, ie, between the tissue (especially the airways) and the BM, may open up new avenues of therapy for allergic inflammation, as well help in the optimization of dosage and routes of therapy. 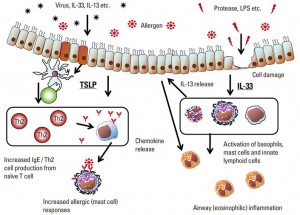 This review will examine how the BM supplies hemopoietic progenitors to sites of allergic inflammation and what modulates these progenitors physiologically and, potentially, therapeutically. Evidence concerning the “systemic effects” of current and experimental allergy therapies will also be discussed.

In adults, hemopoietic stem-cell differentiation and maturation have traditionally been thought to be restricted to the BM microenvironment. However, a novel view has emerged in recent years according to which at least some hemopoietic (and nonhemopoietic) stem cells present in adult tissue may be recruited from the BM, through the peripheral circulation, into tissues, becoming part of a regenerative and/or inflammatory process at these “distal” sites. This process has been referred to as the plasticity of stem cells. More specifically, hemopoietic progenitor cells have the potential not only to give rise to mature cells within the BM compartment that can then egress into the circulation, but may also egress from the BM as immature progenitors, and home to various organs and tissues under the orchestrated control of specific chemokines and cytokines. Once within the tissue, the fate of these primitive hemopoietic progenitor cells is determined by locally elaborated growth factors that permit a process termed “in situ hemopoiesis.”